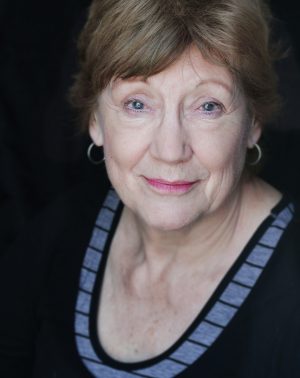 One of English Speaking Board’s longest-standing assessors Joan Blackham has sadly passed away.

Away from ESB, Joan was an experienced character actress working in film, television and theatre alongside household names like John Thaw, Patricia Hodge, Jemma Redgrave and Kenneth Williams. She starred in the original West End production of Calendar Girls and as Eleanor Roosevelt in the film Battle for Sevastopol. She also featured in the hit movie Bridget Jones’s Diary, as well as many, many popular TV series.

When she wasn’t on stage or in front of the camera, Joan’s other great love was being an ESB assessor. She specialised in assessing learners with Special Educational Needs and was recognised as a true professional.

Joan was born in Wolverhampton in 1946, and later in life became involved with ESB as an assessor. All who worked with her knew what a very dedicated and professional assessor she was. She loved the work and didn’t want to commit herself to any other form of assessing. She was a feisty lady with a heart of gold.

Her brilliant affinity with learners was very much in evidence just last March when she assessed at a long-standing ESB centre, Foxes Academy, in the seaside town of Minehead. Foxes is an incredibly special place which aims to equip young adults with learning difficulties to find sustainable employment and to live independently.

“Joan made quite an impression”, says Bunty.

The teachers were all delighted and commented on Joan’s dedication and genuine interest in all the learners. All of us who worked with her shall miss her and anyone who met her was a better person for having known her. R.I.P. dear Joan – thank you for your fun ‘WhatsApp’ videos during lockdown, which kept us all so amused. Thank you for your genuine interest in life, truth and humanity! You will be sorely missed.

I was privileged to spend time over dinner with Joan at our Annual Training weekend in 2019. I so admired her sense of self, her love of her craft of acting but also her absolute and fierce commitment to assessing those who have additional and sometimes significant learning needs.

“When we were all in the depths of lockdown, I wrote to our assessors offering a poem by Betjeman to nourish our souls. Joan thanked me for sharing a poem new to her and for introducing her to an onomatopoeic word that she didn’t know! That for me was the Joan I admired, open and honest to things new, committed and loyal to things precious to her. Thank you, Joan, for all your work for ESB, we honour your memory and your contribution to our ESB learners and family.

We are recruiting for a Trustee/Director

ESB and one of its longest-standing centres – celebrate 70 years together!